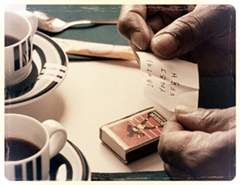 It is said that an important part of practicing Tai Chi is not to practice Tai Chi. This riddle puzzled me until I applied it in my own life. It was the time when I actively chose to ignore my desire to read. I stopped cold. No poetry. No prose of any kind. My mind became a hermitage within whose walls not even humming was to be tolerated. This was but one more way I had chosen to remove myself from the world around me. As with life, I found myself obsessively scrutinizing literature as if it were trying to trick me. I looked for angles. I winked at death symbols carefully placed on the night stand. I made mental note of foreshadowing, whose potential I found often lost in its own darkness. In short, what had once been a wondrous journey of the mind had somehow become a tedious and constant critique.

So it was that when, after almost a year, I decided to return to the word, I did so like an estranged carnivore. A mix of excitement and trepidation. Sometimes the body forgets how to digest. I chose a short piece of southern fiction as my return. I decided to just read the words, take in the images, enjoy it like a joy ride in the country. In the beginning the images and flow of letters breezed by. They seemed disconnected. But slowly the tale started to take shape effortlessly, like a Jim Jarmusch film. My critical eye had softened, and I appreciated the piece exactly for what it was, a nod the past, its kin to tenuous present, its portent for the future. As it happened, it was a perfect story through which to return to reading, as it seemed to connect directly to my life. The main character, having removed himself from the world, finds himself drawn back. He sees the dangers in the years that have passed. The missing step on the stairs. The legion of trucks, shiny as everything new, constantly arriving, gun racks loaded to the hilt. You leave the world long enough and sometimes the path back has grown over. But like the protagonist, you return because you have to. You need it the way it needs you. You may no longer have what it takes, but it might just turn out that your time away will be just what it takes to save you.