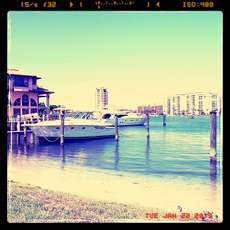 His name is Mitchel Baccinelli, he wants to be a writer, and I feel confident he will succeed: he has talent and humor, and a deep love for life and books. I truly appreciate his compositions in my Italian Writing Workshop and also the empanadas he was used to take to class (much less his blue & black FC Inter jersey). Studying Italian language and literature, and discovering the magnificent Venice, were large part of his education as a writer and as a human being.

Mitchel, introduce yourself to Priamo, please.

I was born in Miami, Florida, in 1991 to a mother from Nicaragua and a father from Argentina. My dearest passions are food, music, literature, and soccer. My favorite literary works are Romeo and Juliet by Shakespeare, Purgatorio by Dante, and just about anything by Borges. Speaking of Borges, I’d like to share with you all a quote from him: “At the end of the years, I’ve observed that beauty, like joy, is common. Not a day passes in which we aren’t, for a moment, in paradise.”

What is your biggest aspiration?

My biggest aspirations are to one day be a professor of literature and the world’s best dad.

What led you to study Italian?

It seems like the catalyst for a lot of my life’s major changes have been inspired by girls and heartbreak. To be perfectly honest, it’s actually just one girl and the last of many heartbreaks I had with her that inspired most of these changes. She was the daughter, the fifth of ten kids, of a terrifyingly large man from the picturesquely tiny island of Capri, and she taught me my first real words of Italian that weren’t food names or “ciao.” She sparked my curiosity for the language as she looked at me with those unforgettably large brown eyes and said “ti voglio bene.” During my first semester of university, my heart was split, sun-dried, and crushed into tiny flakes by those words being said for the last time, as we broke up. Mutually of course.

The following semester, I decided to start fulfilling my school’s language requirement, and whether out of familiarity with the language or as an act of anger towards her, I decided to take French. Truthfully, though, I’ve never smoked a cigarette, and I don’t look good in horizontal stripes, so I could never be fluent in French. Now, I had to find a new language. There were multiple languages I could have chosen from, but I already speak Spanish, don’t possess an aggressive enough tone for German, was never much drawn to the sharp staccato of Mandarin, and my allergies would make Arabic uncomfortable to speak during certain parts of the year. That left Italian, and having put my heart back together by then, I decided to take a class. That class established a foundation much more important than a simple introduction to the language, though.

The professor, a proud Venetian, repeatedly told me that Venice is the most beautiful city in the world, and convinced me to go on a study abroad program which would prove that fact. It did. More importantly, though, in Venice I finally figured out what that vague, vacant feeling I’d long felt was. I lived in a building built in the 1400s and walked on stones from before that, and all this gave me a sense of being a part of the collective human history. The town I was raised in, by contrast, was built in the 1960s, in a country that was established in 1776. My landscape at home was barren, lacking the particular flatness of stones smoothed over by a million sets of feet, and the warmth of another million layers of memories like omnipresent, abstract swaddling clothes. I discovered a feeling of comfort living in a place where I was constantly surrounded by the history of mankind. That discovery also marked the moment when I really started to fall in love with Italian.

Too many people in the world want to forget the memories and the history of the world. They don’t care what was said and written before; they only want to say something new, write something original. Italians, and their language, however, don’t forget that history. The café owner quotes Dante, the pizza guy recites Petrarch, and the ice cream vendor tells us the history of how the church around the corner was set ablaze in the Renaissance by a group of drunk teenagers. So, where my journey in Italian began with me trying to forget a recent memory, it ultimately led to me learning to appreciate and cherish our collective history, and learning what I needed in order to fill that empty, echoing space I’d had for so long.

You mentioned Borges. What do you like so much about Borges?

The first reason would be simply that Borges is Argentinian. Reading his writing is like listening to my grandparents, with the same optimistic spin on “disfattismo” that is particularly Argentinian, and that familiarity is automatically endearing. But also, Borges’ writing truly mirrors the way I think, not in subject, but in method. My mind constantly intertwines dreams and reality as a means of introspection. This is the way Borges writes, creating an abstract world where dreams are as important as sight, smell, taste, feel, and sound, because ultimately, they all give us information about the world and ourselves. Also, Borges’ vision of heaven is an infinite library. The man had his priorities in order.

Borges would be a dish called “Peceto.” It’s my great grandmother’s recipe for pot roast, cooked for hours with onions and wine. Borges’ writing is gentle; it doesn’t seek to roast your brain with new ideas. It merely looks to break down the connective tissue which hinges us to the concrete in order to marry dreams and reality, like the dish marries wine and meat. Shakespeare would be an empanada. Each of his plays, like an empanada, is a simple, unassuming parcel. The outside is the simplest and crudest of ingredients, dough, just as the beginnings to most Shakespeare plays are filled with crude humor. But that dough, simple in its end result, takes some mastery and ability to make and form. However, the best part is what’s inside, whether it’s a romantic dialogue that melts your heart like gooey cheese, or a violent invective that stings like a spicy beef filling. Dante would be slices of Finocchiona with Bread. There’s nothing more Florentine than Dante, and the first time I ever had Finocchiona was at a small sandwich shop across the street from the Stadio Artemio Franchi while on my way to see the statue of Batistuta, which, as I was sadly informed by the shop-owner, is no longer there. This may seem overly simple for Dante, but the truth is that’s the beauty. Dante is a wordsmith who mixes a couple of ingredients together and then lets nature and the divine take charge in order to make the mixture even better. Besides, nothing goes better with Finocchiona or Dante than wine.

One final question. Why is such an intelligent young man as you a fan of FC Inter?

My love for Inter Milan can be summed up in four words. Javier Zanetti, Il Capitano. Zanetti is my favorite player of all time and is one of my personal role models. Obviously, forever being El Capitán of the Argentinian National Team means a lot, but it’s more than that. When he was a young boy, he worked three jobs to help support his family, went to school, and still played soccer. He’s humble, an amazing leader, not controversial or scandalous, a great father and husband, and loyal to his team. On the field, he’s extremely versatile, having played in just about every position except for goalie and striker, works tirelessly, has fantastic technique, and leads by example. He also owns an Argentinian restaurant in Milan, and, even though he turns forty this year, still plays better, maintains better physical condition, and puts more effort than most players in their twenties.  The man is the perfect example of what a man and a soccer player should be, and if he believes Inter is a team to love and cherish, so do I.